brought to you from dan harmon of community fame and some other guys... ( edit ryan ridley, Justin Roiland )
its pretty funny. persoanly i like dan harmonds writing style
if u like crazy scifi and a weird take on back to the future then this is up ur alley

So yeah, this is a show and it is amazing.

First season is out, second season just starting airing slash leaking all over the internet. 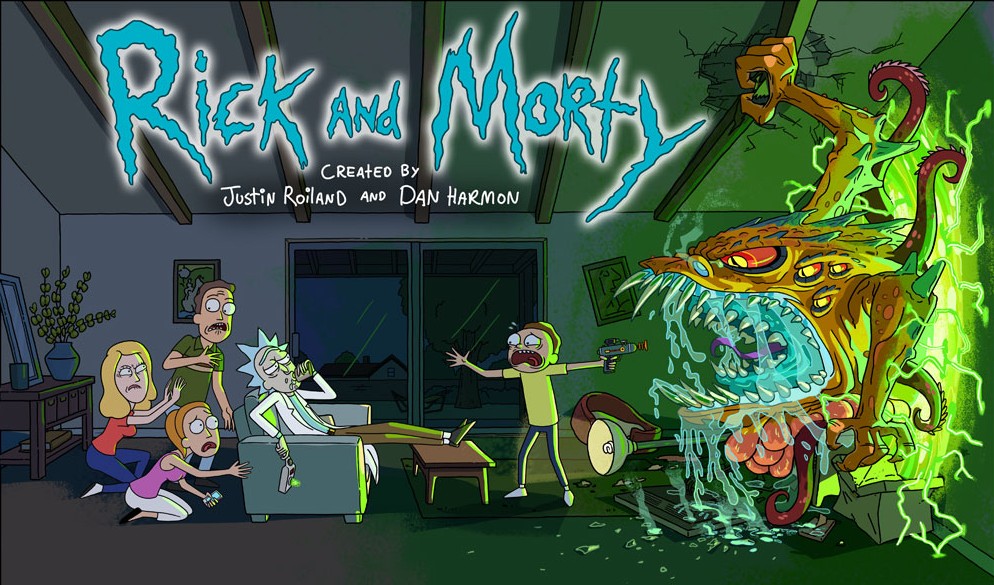 Rick and Morty is the brain child of Dan Harmon (Community, the good seasons) and Justin Roiland (even if you haven't heard of his name, you've proably heard his voice). Based off a short skit that Roiland did almost a decade ago (NSFW), that somehow got turned into a show, Rick and Morty features the titular characters going on crazy adventures throughout the multiverse.

And definitely not for children.

To elaborate further; Rick Sanchez (Justin Roiland), a genius inventor/scientists/sociopath and raging alcoholic, dragoons his grandson Morty Smith (Justin Roiland) into acting as his aid/accomplice on his inter-dimensional travels through time and space on "adventures". On occasion, Rick ropes his granddaughter Summer Smith (Spencer Grammer), daughter Beth Smith (Sarah Chalke) and son-in-law Jerry Smith (Chris Parnell) into the mix, or they just get caught up in dealing with whatever eldritch abomination Rick has cooking in the garage.

For the most part Morty is kind of a doormat and just goes with it.

When not romping through the multiverse with Morty and accidentally (or deliberately) committing arson, murder, xenocide and other miscellaneous crimes against sentient lifeforms, Rick lives with the Smith family tinkering on outlandish and possibly world ending inventions.

A lot of them get out of hand:
https://www.youtube.com/watch?v=AGFev2BmnhE

It's first and foremost a fun show to watch, but word to the wise, it hits some pretty dark and deep tones as the they explores the complex relationship between Mortys parents and the underlying cause behind Ricks alcoholism. The third episode of the second season ends on near Jurassic Bark levels of feels.

Give it a shot.

"We don't whitewash it either, the pirates are really rapey"

Episode three of Season 2 kicked me in the dick in a good bad way.

That ending was more gut wrenching than Jurassic Bark.

Yep. great show - They all became my favourite episode once watching.....hard to separate a few tbh

Liking all the guest voice appearance; David Cross, Rich Fulcher and Jermaine Clement have all been in episodes...the latter is in my current fav (though that can and probably will change

Spoiler: Show
Also - seems you can watch the majority of the episodes here; http://www.adultswim.com/videos/rick-and-morty/