Dalaran (if thats what that floating city is) didn't start floating till The burning crusade expansion if I remember correctly.

I want a warcraft 4.

Yeah i'd love a warcraft 4 too- but would prefer they took a content slightly closer to realistic - not losing its identity but not so blatantly cartoony. All of Blizzard's games these days look the same, they have a very distintive style. Starcraft, Diablo, Warcraft, Hearthstone, Overwatch, Heroes of the Storm - they all look the same, same cartoon style. I found this particularly the case with Diablo 3 which just looked like a top down wow IMO.

Yeah definitely agree with you on that Deepjay.

It's really been a case of "Oh that proved popular, lets just do that for everything".
Not sure when or why it devolved into this singular minded design but it is disappointing. Back with Starcraft and Warcraft 1 & 2, even with the limited ability back then, they still had a rather distinct design from each other. WC3 built upon the same vein as WC1 & 2 but for some reason they took that same path with SC2. Oh well.

But in any case, the movie cannot have absolutely anything to do with WoW, there is something close to 50 years difference between WC1 & current WoW and within that 50 years they have tried to cram 500 years of turmoil. There is far too much crap (being literal here, so much 'lore' in WoW is just utter crap now) to cover in 3 movies, let alone 1.

I have no issues with a cartoon/stylized look - i'll just point that out. All of their products do look fantastic - but to me, it's like they're all in the same universe. The overall design philosophy has become their only look - which kind of sucks when you're talking some very different settings - i mean diablo, starcraft, warcraft now all look like they're the same world. If they make a warcraft 4, you can almost be assured it'll look like starcraft 2's various expansions.

Considering how fucking amazing awesome their cinematics are - some of the best - if not the best - in the industry, the consistent cartoon look across ALL products now, it's a bit of a cop-out IMO. Almost as if they've applied a style guide to all Blizzard products - end result being their indivudual IP's feel watered down/the same.

I gotta say, this is looking like it may actually be good. Of course it might totally suck ass, but i never would have thought anyone could pull off the look of Warcraft live action without it looking goofy but it just doesn't. It really doesnt.

I remember seeing the trailer last time I was at the cinema's late last year.

Has the main guy from Vikings playing the protagonist.

i too am looking forward to best corea's industrial light and magic show. the only ones that know how to animate besides the nips, and even they cut corners 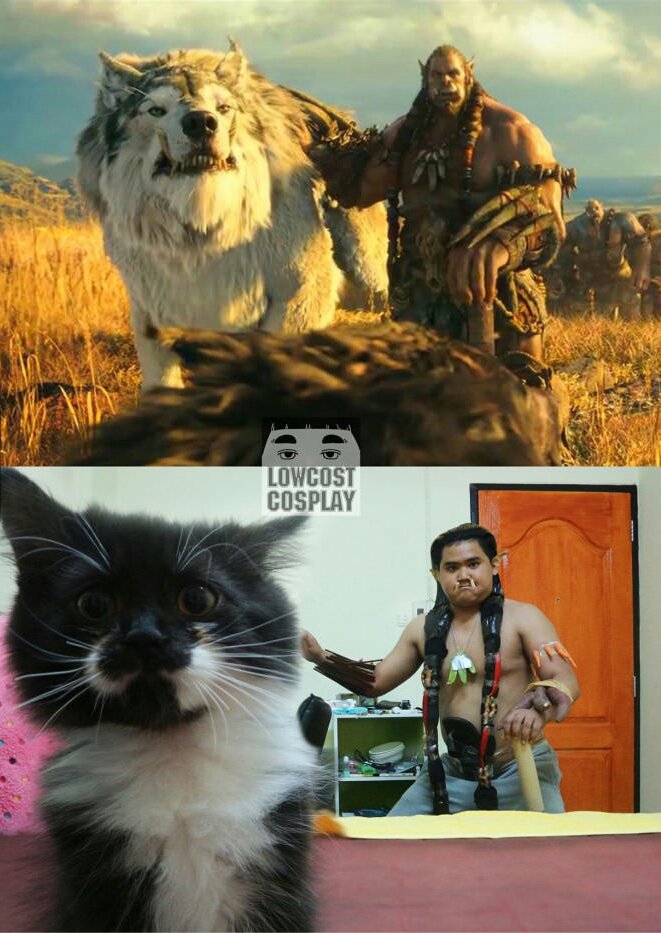 I thought Silent Hill hit the right tone and the titty twist/hide throw might be the most striking kill in horror. Although not enough to have me chase any sequel(s?).

Right now im not typing on my phone i can say a little more.

The movie was like low-grade embarrassment level fantasy. The thing that struck me as odd, the orcs - arguably the most fantastical element of the movie, were the best part of the movie. They looked superb. The way they blend live acting into animation these days is utterly convincing and really exciting to think what might be achievable with it. When you look at the recent Planet of the Apes movies - the last one in particular, good times.

While the orcs looked fantastic in their variation and very true take on the Warcraft orcs - everything human was just lol by comparison. The worst part about them IMO was the casting. Key players just failed - almost as if they cast actual WoW nerd players to fill the roles. The main character Luthar - played by Ragnar of Lothbrok fame was basically Ragnar of Lothbrok fame. I like Travis Fimmel in Vikings - and I love Vikings, but i suspect like certain other actors, he only has one character in him. In Warcraft it's obviously more light-hearted with more attempts at mostly lame comedy. But he's the same character - the same vague stares, head jerks and other familiar mannerisms.

But worse - the key human characters are just lame. The King - absolute pansy looking actor yet amazing fighter who can easily best orcs 2-3 times larger than him. Khadgar the mage - literally like a wow player yanked away from their computer kicking and screaming. Medievh (however you spell it) - the arch mage gone all Warlock - has literally no menace about him, similar in appearance to Tim Minchin. Tim Minchin would have been more menacing.

Then I loved the orc female captured by the Alliance and quickly becomes their ally and auto-love interest of Rangar Lothbrok. She's the same size as Ragnar - ie human size, where other orc women are larger, more menacing. I couldnt help but think about what this chick must have endured when a massive orc cock ploughed into her - because she's conveniently Ragnar Lothbrok cocksize in this, where all the other orcs are massive by comparison.

The rest of the movie was just meh. It was interesting for as a former wow player, of course i was interested to see their take on the various locations. It was heavy in fan-service (which is not neccessarily a bad thing) with varying quality cg backgrounds, from the very good to the very fake looking. I cracked up at the mages of floating Dalaran with their comical looking glowing eyes. There was even a hint of the back of a Night Elf chick in one scene - which would have had my attention, for everyone knows Night Elves = teh h0rn to us computer dwelling e-masculine types.

The plot was basic - open the dark portal by using human prisoner lives as fuel to bring through the rest of the horde from outland. It wasnt the worst plot ive ever seen, but all of the above just took it down to Eragon-level lameness. It was made worse by how convincingly good the orcs were - plus the orcs themselves were also grave and serious, making the human side seem all the lamer with their little cartoony Lion banners (aka true to wow).

Worth seeing for the orcs i think but not much else. Good for a bit of lazy afternoon switch your brain off entertainment, but if you remember some of those Dungeons and Dragons movies in the last 10 years - it's that same kind of movie, the kind if you paid good money for at a cinema you'd be all like - nigga_orc_waaaaaaaaat.

Then I loved the orc female captured by the Alliance and quickly becomes their ally and auto-love interest of Rangar Lothbrok. She's the same size as Ragnar - ie human size, where other orc women are larger, more menacing. I couldnt help but think about what this chick must have endured when a massive orc cock ploughed into her - because she's conveniently Ragnar Lothbrok cocksize in this, where all the other orcs are massive by comparison.

I lost my shit at this.

Didn't hate it. It was mindless and the Orks were good. Ragnar was Ragnar, Green Jesus origin story made my eyes roll, Gul'dan was great.

Did they imply that Medivh was Garona's father? Travelled, lived with a wise race and a met a woman. The idea of it being Tauren would be furry fan service but I'm pretty sure that in WC3 Medivh helped the orks.