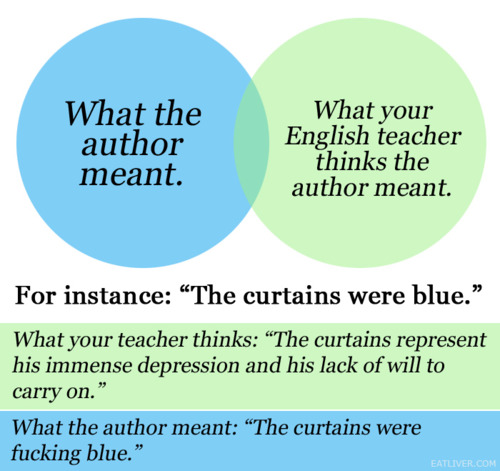 Write a story. Go on.

Now tell me it isn't being passively affected by the sum total of your life experiences, whether you know it or not. The colors we choose, the metaphors we use, and the things we write about, often contain both intentional meaning, and unintentional meaning. Take, for instance, the child drawing droplets of blood, a boy crying, and an angry man on a piece of paper. He doesn't intend to convey that he is being abused at home, but these are red flags, and do happen when children are being abused. Is that to say that we dismiss the piece of art (art is, at its most minimum, representation of reality) because when we ask him "what did you mean" he replies "the angry man and tomato ketchup!"?

Extreme example, but everything we say, do, record, write, draw, sing, imagine, is all affected by our life experiences - the sum total of. Values, attitudes, political alignment, all that shite.

Now, maybe I'm reaching with the gas station thing. But the choice quote is:

So I'm just giving my opinion. It makes sense to me, and makes the film more interesting. If you're going to fucking sit there and tell me that, in the writer's mind, the director's mind, and in YOUR MIND, there is no thematic link between re-acquiring a FUCKING RENEWABLE ENERGY SOURCE and then PARTYING AT A GAS STATION, immediately preceding the DOWNFALL OF HUMANITY, then maybe you guys just need to think a little harder, or not mong out at the cinema.

Same goes if you think every choice in a film is just a matter of convenience, and that every shot and every location and every detail only serves to "further the plot". Like, seriously, have a little more respect for the thousands of artists, from writers to set designers to directors to editors, who all studied their craft, and all made it to the upper echelon of their professions. These aren't dumbarses who just put shit together unknowingly. They hone their craft, and their work is crafted! Often with great, ridiculous attention to detail.

Again, this is all just my opinions, thoughts, and discussion on the films that we all watch. I'm not trolling. I really, honestly, earnestly believe that in many of these movies, we are missing a lot of valuable cues to insight on modern society, as it is viewed by the Hollywood engine. So many films are underrated because they are written off as being "stupid" when, honestly, it was the viewer that was stupid.

I know I go on and on about Michael Bay and Transformers, but seriously, watch Pain and Gain, and tell me you don't see a great, subterranean river of meaning and criticisms and indictment of contemporary American and western culture flowing beneath that on-the-surface flashy-as-fuck film. It's not even subtle, and yet so many people walk out of that film going "that was shit."

I can appreciate those of you who follow the school of thought: "if I have to ask what it symbolises, it doesn't." I really can. But, to me, watching films that way is boring as all fuck.
Last edited by Monk on Mon Jul 28, 2014 10:02 pm, edited 5 times in total.

Or we could all just say "yeah that was a cool movie" and "that movie was shit Bay shit on my childhood" and just have like 8 replies saying the same thing.

It's fun to talk about movies, buddy!

I copyedit fiction books for a living so I guess I'm in the teacher camp, maybe? Only, one correction, it's never what I thought the author meant, but just what I got from the film/book/whatever.

For the record, I have nothing against interpreting art/books/movies/music whatever - there's nothing wrong with it, and it's something many people take great pleasure in.

I also write on the side, and have what i feel is a pretty good understanding of all the components that go into a good story - aka character/plot/setting/character development/passive vs active characters/voice/yadda yadda. I like to discuss these things, particularly from a review point of view, as many of us do. But i'm utterly lost when I start reading breakdown interpretations which border on the movie based equivalent of

The Transformers comments for example - um yeah no. Hey if that floats your boat to see what crazy assed ideal you can pull out of it - then sure, go for it, but I just don't buy it.

The image above perfectly summarises the differences here, IMO.

And why not a gas station? They're everywhere. They're about your most common building you'll find dotted around places - particularly more remote areas of road. You're not going to find a toilet block - well not as commonly, unless it's attached to a park or something. A guard post? Why would there be a guard post out there?

If we family feuded this, you could almost guarantee gas station would be in the top 3 (and yes i felt a bit gay saying family feud).

I think when it comes down to it, there is no clear reason why it should be anything but a gas station. That it makes sense logically, and thematically, is probably the single largest piece of evidence that it carries meaning beyond convenience.